Alright, this is the Metric version of the G4 Prybaby® tool. Same exact features as the American version below but featuring 6 decimal sizes in 2mm increments, 6-16mm. The tool features the distinctive "M" as part of the lanyard hole to easily distinguish it from its American cousin.

It has been brought to my attention that only three of the wrench sizes correspond to common Metric wrench sizes. So in future editions I will redesign the opening to exclude the off sizes even though it messes up the tidy 2mm increment steps. I think it's still a nifty tool nevertheless and I hope quite useful despite my small screw up.

Sold out for now, thank you very much folks! 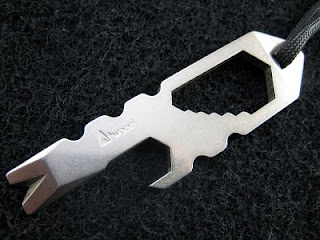 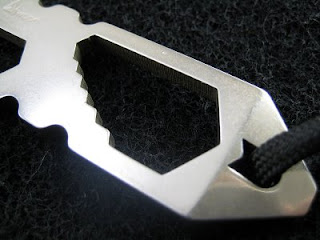 It's a real Christas present for overseas Atwood fans like me:)
Thank you very much, Peter!

up since 4am, i think my friend will enjoy this...worth the wait

nice work, and I even managed to get one! :) thanks!

Just sent you an email. Thanks

Have to pass on these to give our Atwoodites outside the US a chance...

Wow - the first Atwood I've been able to score in months! My timing has recently been terrible, usually missing the sale or even the lottery completely.

We had some company, so I was making a big batch of pancakes, and when I finally got back to the computer, I saw that the sale was an hour old, and had been posted RIGHT after I started cooking (there's my timing again!) I was very surprised to find they weren't all gone. Thanks Peter!

At this point, I'm starting to wonder if Peter is watching to see when I get up and leave the computer to start sales. Hmmmmm.....

Ooh... 13 minutes old and sold out. Good thing for me I have a G3. Wait till next time. Merry Christmas to all.

Wow, I think this sale went nearly 3 hours before they sold out...you must have cranked out a ton of these Peter!

Be careful going to the post office today...not sure how the weather's holding out where you are, but here in MN we're getting dumped on pretty good. That storm that gave Las Vegas 3.5 inches of snow is just getting here, and it's not looking pretty so far...

Oh, it's nasty here. We had eight inches last night and another couple this morning. Supposed to have another 6-12 tomorrow. This blows! :(

So, if it lets up I will make a run to the PO to drop off the pre labeled packages today. If not, Monday they will go out.

Oh boy! We are getting hammered here in Washington...supposed to get 6-18 inches of new snow tonight...hope the mail man gets here with my G4....LOL!

Snow here on the West Coast of Canada too...looks like more coming tonight and next week...finally a white Christmas!

I must have been lucky to score a set of the new G4's...both metric and standard....but now it looks like I'll have to keep my eyes open for the new improved metric version down the road ;)

I saw your note about non-standard metric sizes. I've checked all my metric tools and I have even numbered meteric allen wrenches and box wrenches in the 6,8,10,12,14,16 mm sizes. I don't think they are uncommon at all. I suggest NOT redesigning the G4's and leaving them just the way they are!

Ohh bummer, missed those - here in OZ I think I would have to be up all night to get in on one of these... Those 17hr time differences are a pain!

Are you going to be doing some more metric anytime soon...??

I might have a couple more and I do respond to emails... ;)

So what else you have for us this week peter?

I think that maybee you should make G4 metric Prybabies with odd mm. For example nr 11 and 13 are the most common.