Looks like a very reasonable week ahead here in New England...temperatures should be in the 40's and even the 50's so hopefully we will get rid of a lot more of that pesky white stuff. I'm looking forward to some warmer days, especially in the next week or two so I can catch up on some long neglected house and shop maintenance. Winter has taken its toll and the shop is long overdue for a good cleaning.

I'm getting much closer on the first batch of CPM 154 steel Prybabies. Those will be going out the door and headed to heat treat by the end of this week. The second batch of CPM 3V Prybabies is also already well underway and if I can just keep my nose to the grindstone those should be following sometime next week. After that I will be grinding more steel tools...GripCoins are getting closer too as well as something heavy, round and unexpected.

Today I have a small batch of 5/32" thick Titanium Bermuda Triangles with fine stonewashed finish. I've been doing a lot of anodizing lately so I thought I'd slip in a few ti pieces for the Vanilla Crowd...there's no shame in that btw, just ask my wife: when presented with 24 flavors of ice cream I usually pick vanilla!

Anyway, this batch has a different edge shape than the previous Fractal Edge series. I'm calling this one the Hexi Edge version and it features my familiar hex shaped grip edge. I think they have a terrific elegant look to them and combined with a long slow tumble they have a soft feel in the hand.

The Hexi Edge Bermuda Triangles will run $65 plus shipping and the link is below. Thanks for stopping by and have a great week ahead!

Plain Hexi Triangles are gone but anodized ones are coming soon. Thank you! 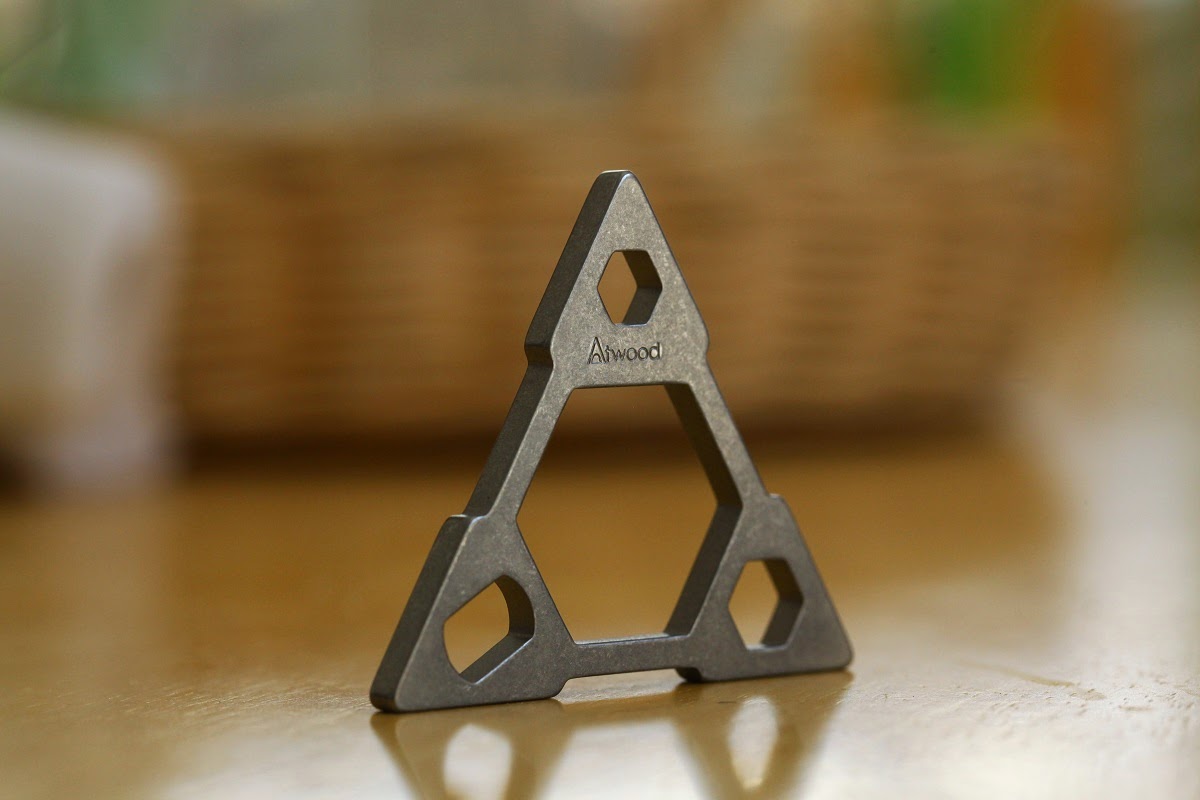 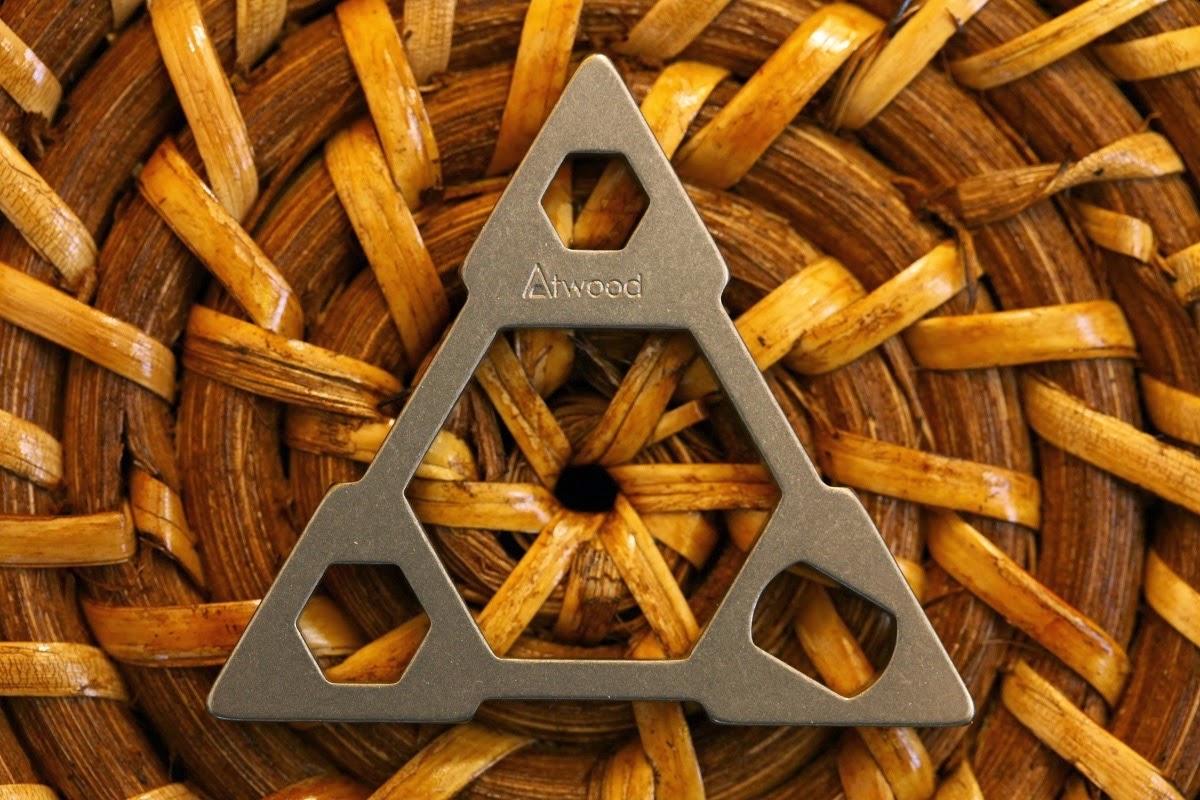 It can't get here too soon in my opinion, still pretty cold here in the Northeast.

I can't remember where I first saw little openers in this style. It might have been at a backyard keg party in college or maybe it was at someone's house during a March Madness basketball game. But for a while it seemed like they were everywhere. Usually they were made of aluminum but then over the years I have even seen them in hard plastic with a metal insert.

The one thing that has been a constant is that I always found them lacking in one way or another. Sure, they open bottles just fine but the lanyard hole is always too small and they just don't have much else going for them aesthetically. Lately I have seen some that were much thicker than the old ones as if thickness alone would fix the poor overall design decisions...although why making something so thick that it crowds out your keys is beyond me and besides, what if you don't have a huge keyring?

Anyway, for several years I have thought about making a new tool that would take this simple design to the next level. I wanted to add a little more function to it and up the ante on the overall aesthetics of the piece. This is a first attempt at doing just that.

The Hatchling is a cute little thing, and I think you will agree that his arrival is just right for the season. Even though he is small, at only 2.5 inches long, his massive .260 inch thickness certainly qualifies him to be a member of the Roid Family of tools. The hungry little mouth is a 5/16 hex wrench and of course he is very thirsty too. The tiny egg from which he came is a 3/8 hex wrench. And if you turn him on his side his nose becomes a screwdriver which doubles as a Mini XL Pry Bar.

Even though I consulted my Sibley's Guide to North American Pocket Tools, I'm still not sure just what species the Hatchling is, but he comes in a wide variety of colorful plumage. There are some solids, color fades, rainbows, and even some unexpected effects. Where possible I have tried to preserve some of the texture of the thick titanium plate stock to add character. Some of the resulting textures and color combos are very interesting and unusual.

And for those of you wanting a plainer and heavier piece, I have a big batch of these coming in 1/4" CPM 154 steel in a month or so.

The Hatchlings will run $65 plus shipping. I'll make it one per customer on them and, as usual on these mixed up color batches, I will send you what I send you so no color choice. As proud new parents though, I think everyone will be delighted and get along fine with the new arrival!

Thanks for stopping by everyone and hope your weekend is a relaxing one.


Hatchlings are gone for now but more are coming soon, thank you! 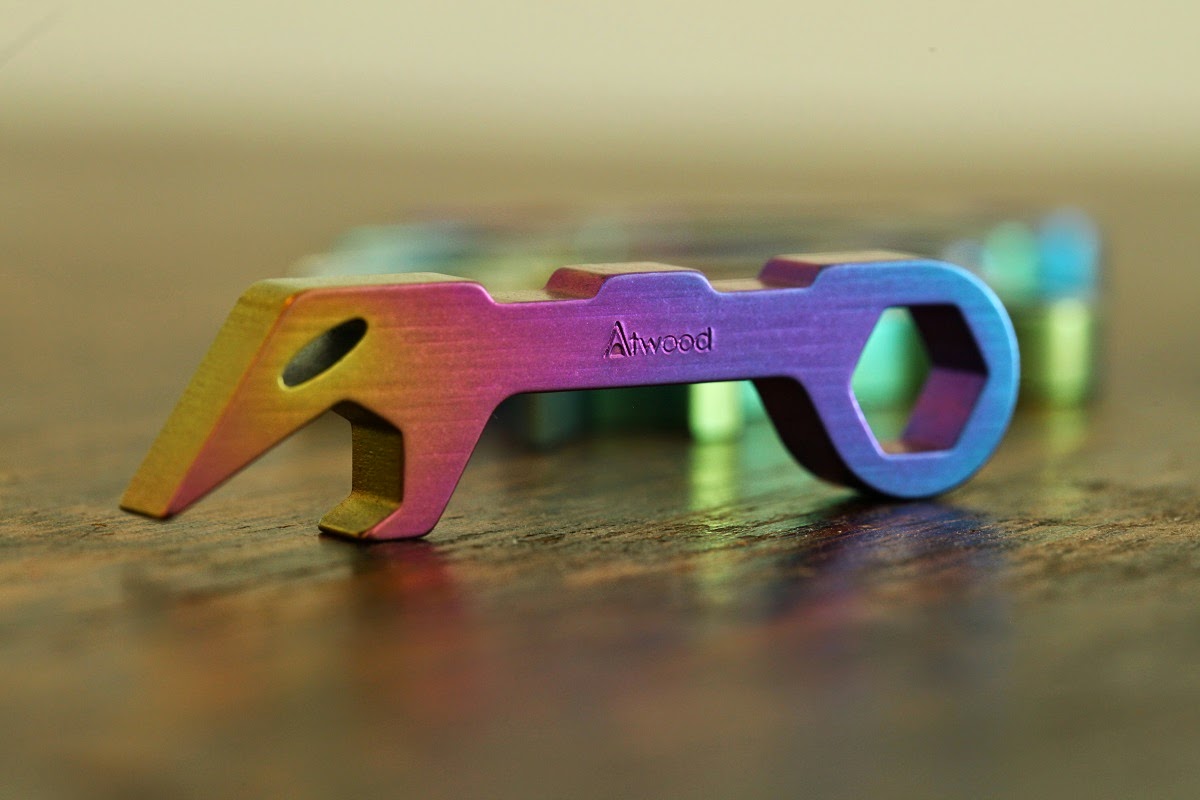 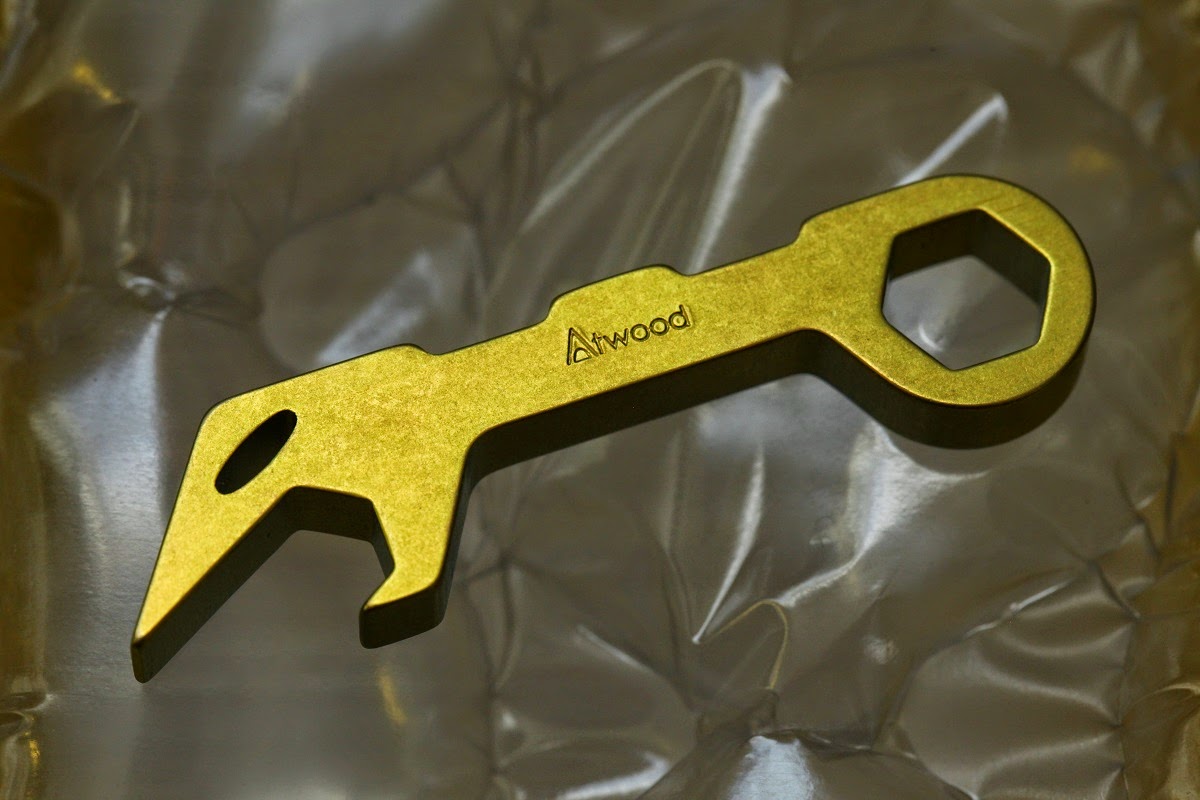 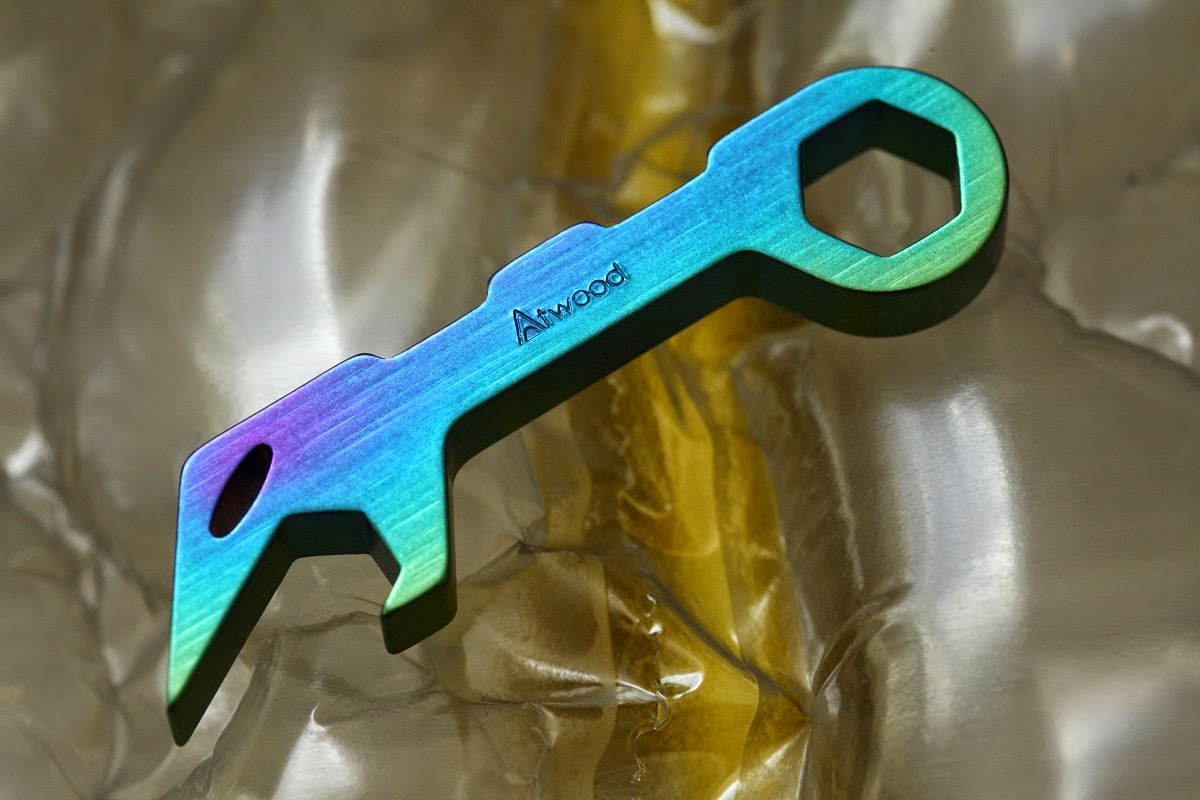 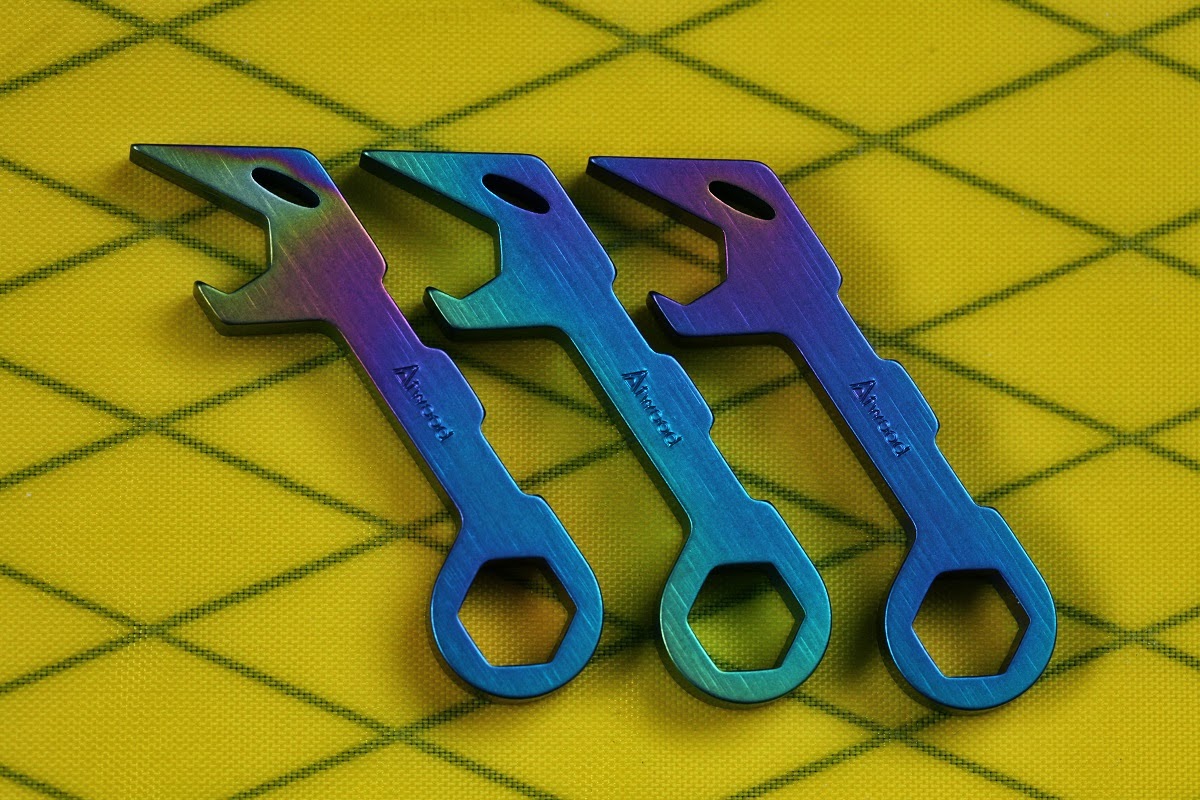 We are finally getting some melting here this week! A minor ice dam caused us a little leaky roof trouble this past weekend but thankfully now seems to have healed itself...I continue to climb up into the attic and monitor it every day though just in case. Pain in the butt and I will be happy to see the end of this tough winter.

Well, I am still fighting this R25 Ruler batch but am making great headway and I finally have enough done to do a sale. Originally I had hoped to split the batch in half and do one sale for plain ones and one sale for anodized but for a variety of reasons I decided to just do one batch of anodized pieces for now. I'm afraid those who wanted plain will have to wait until I can get to a batch of the 3 inch stainless or bronze ones. Hopefully those will be forthcoming at some point this spring or summer. However I will have to get a handle on production costs because I can't believe what these ended up costing me to make, let alone all the time I poured into the finishing.

At any rate, I am so pleased with how these tiny ruler tools have turned out. They are made of .160 titanium so are quite hefty for the size, sort of like a little ti nugget. They feature a simple 2 inch scale on the front side and a 5cm scale on the obverse. Hence the name R-Two-Five which stands for "Ruler: Two Inch, 5 Centimeter". The marks are CNC engraved rather than laser marked so they are deep, V shaped for accuracy and will be quite permanent. An O2 wrench, 1/4 hex opening and cap lifter complete the tool.

Although the R25 could be carried on a keyring I had originally envisioned them to be used as a pendant so they are drilled with two small holes to accept the included length of bead chain. They are anodized in a wide variety of solid colors, simple rainbows and color fades. Sorry, I can't give a color choice, I will send you whatever I send you, but rest assured they are all gorgeous!

The R25s will run $65 each plus shipping. The batch is a bit smaller than I had originally hoped for so I will have to make it one per customer please. The purchase link is below. Thanks for stopping in and here's to warmer days just ahead!

Rulers are gone for now, thank you so much! 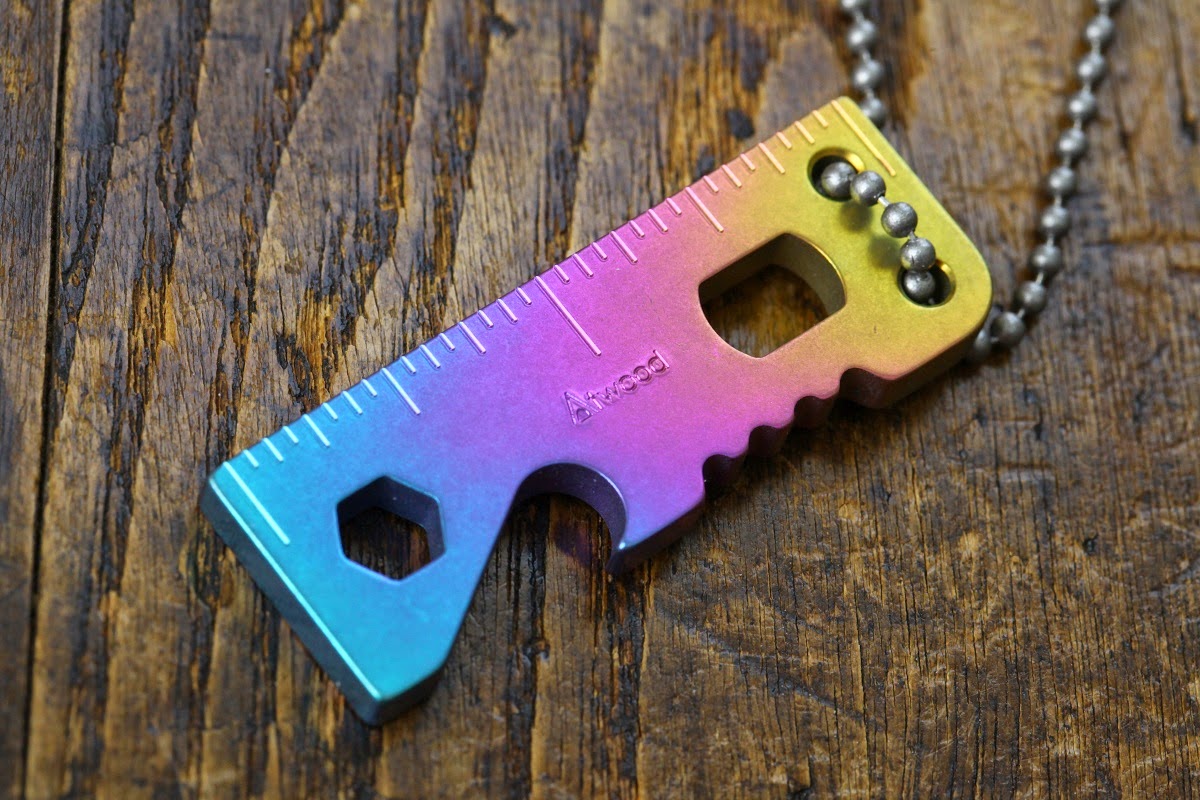 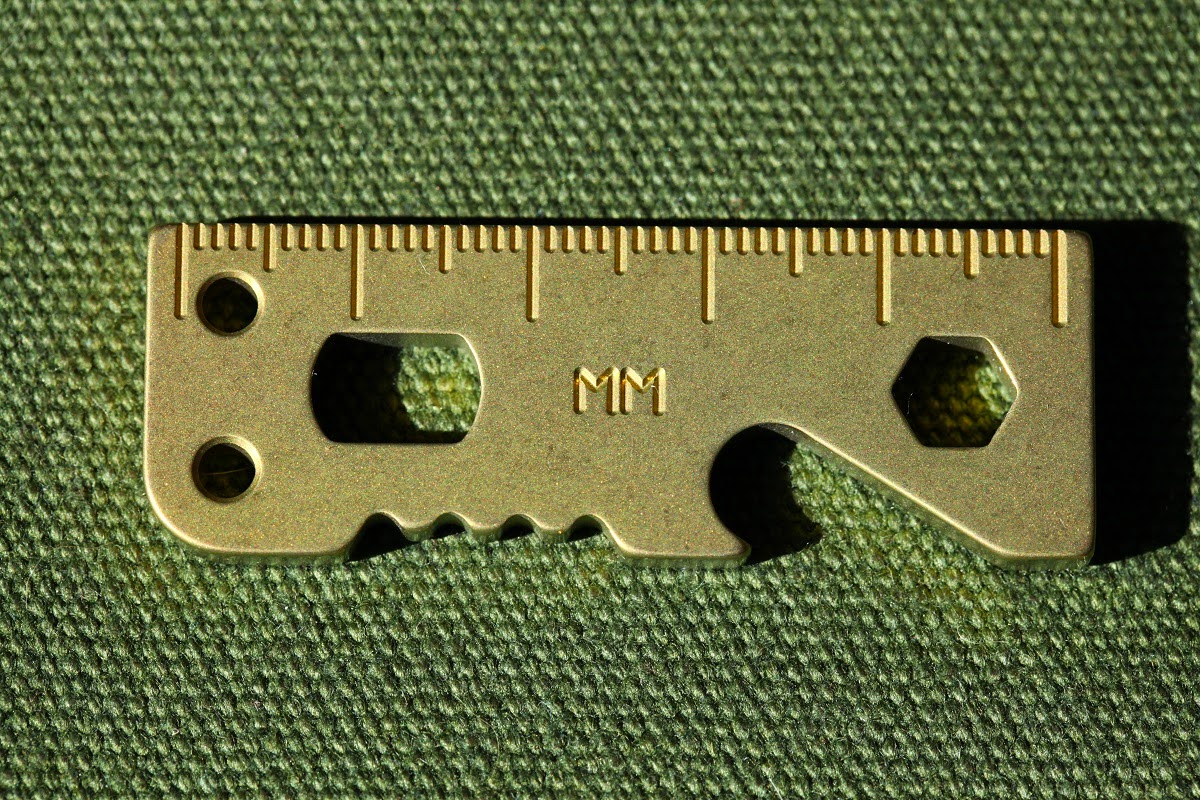 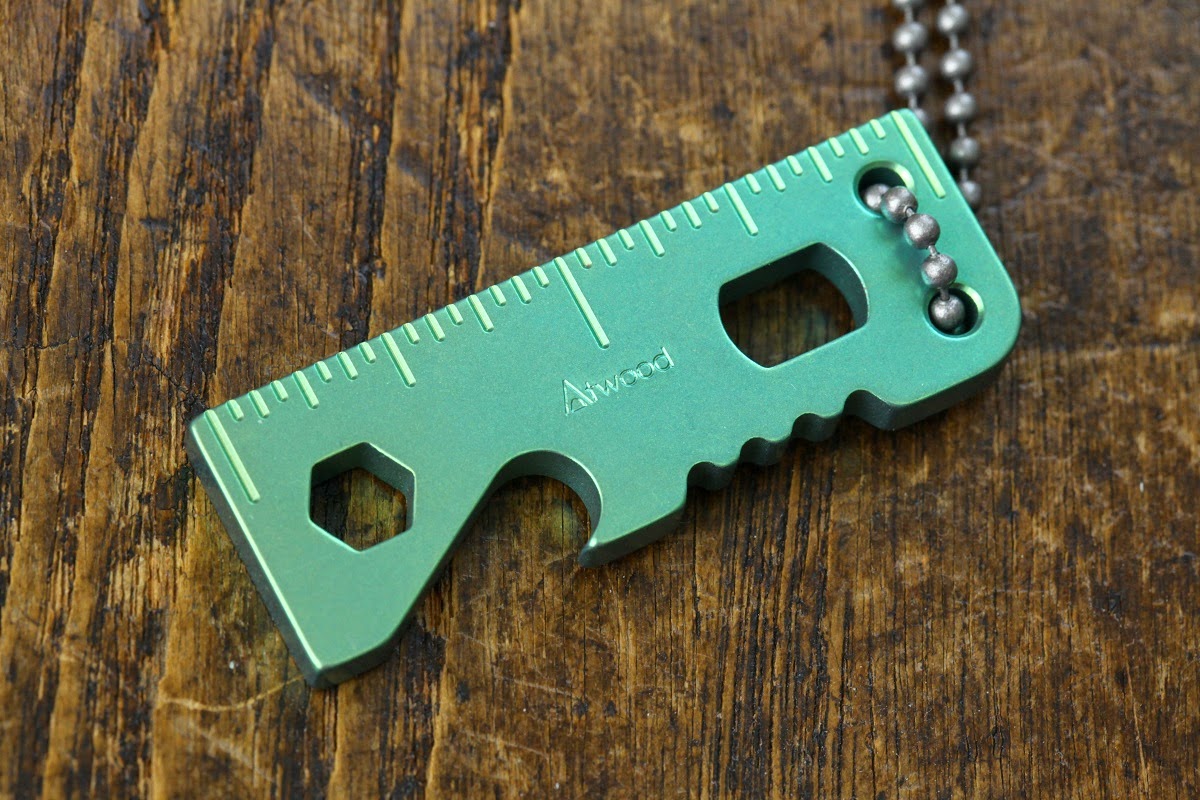 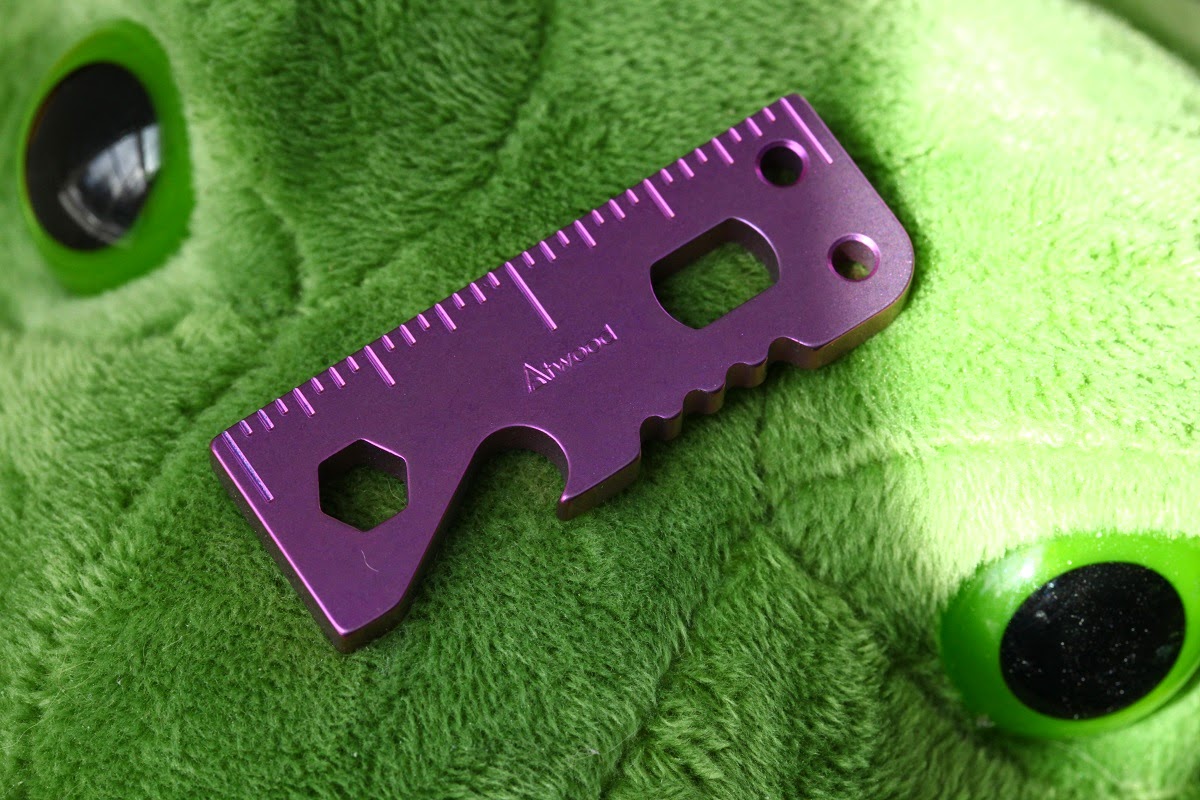 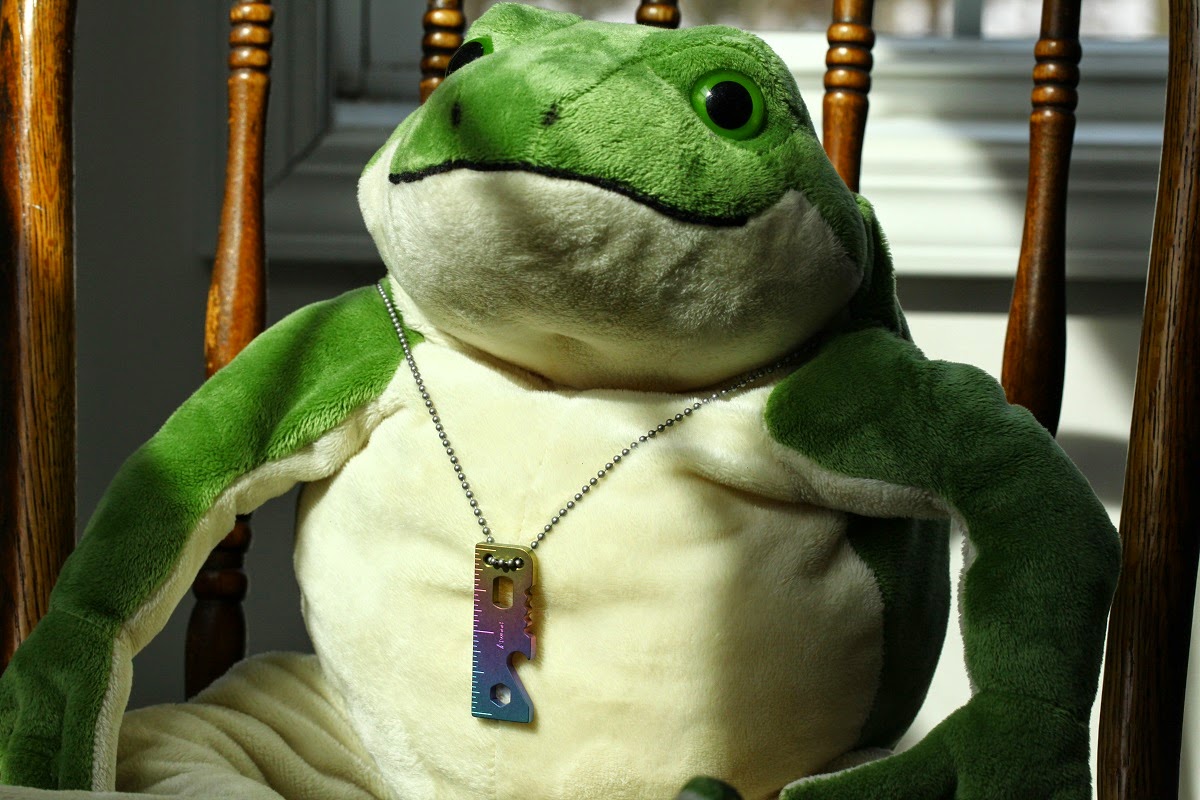 We're finally getting a tiny break from the bitter cold and that should get the maple sap starting to run finally, albeit a week or two later than usual for sugaring. Maybe if we're lucky we might even see the edges of the enormous piles of snow and ice start to melt just a little bit this week. Of course more snow is on the way tonight.

So much neat stuff is on the drawing board that I'm just about bursting at the seams to tell you about it.

Progress is once again being made on the little R25 ti rulers and they are coming along nicely. The engraving will be done in a few days and then I can start finishing them up. I posted some teaser pics on the Toolbook group for any of you who aren't on FB already. Hopefully I will have the R25s ready by end of next week.

In other news, several new Prybabies are on the way. The first batch of CPM 154 pieces is now ground and I'm just waiting on some carbide drills and new diamond files to get the prep work finished so they can be sent to heat treat. The second batch is CPM 3v and those have had the first steps of prep work completed but I still need to grind them, etc. so they are a ways off. The third batch is titanium and they are about to get milled. The fourth batch is metric and in CPM 3v. They are still on deck for cutting.

Then I have a bunch of other projects drawn up, some of which are already underway. I'm really excited about the Wheelman (in both steel and ti), the 80's Classic Roid (steel and ti), R37 Ruler Tools, GripCoins, Qubes, Wrants, more Tombstones, updated Mini FunnyBones, the Small Fry, StrapOns, the Lobsterman and a few others. Yes, I have been very VERY busy this winter thinking about new designs, improving older designs and playing with new EDC ideas. I can't wait to start getting some of these done so I can get them into my own pockets.

Today I finally have the HA III Aluminum Roll Bars completed. These are made of 7075 Aluminum, very similar to the grade that they make M16 receivers and extension tubes from. It's incredibly strong for an aluminum alloy and also featherlight. I have given these a fine bead blast finish and then sent them for Natural Finish Hard Anodizing so they have a tough, low light, military look and feel to them. The black o-ring and hardware really complete the package. Throw some matte black gaffer tape (find it at Amazon) on there and you will be ready for wherever the action takes you.

The AL Roll Bars will run $45 each plus shipping and the link is below. I'll make it open quantities as the batch is generous in size. Thanks for stopping in folks and for continuing to support me in my efforts to explore new designs, materials and ideas. As always, I'm extremely grateful!

First wave of these are gone for now, thank you so much! 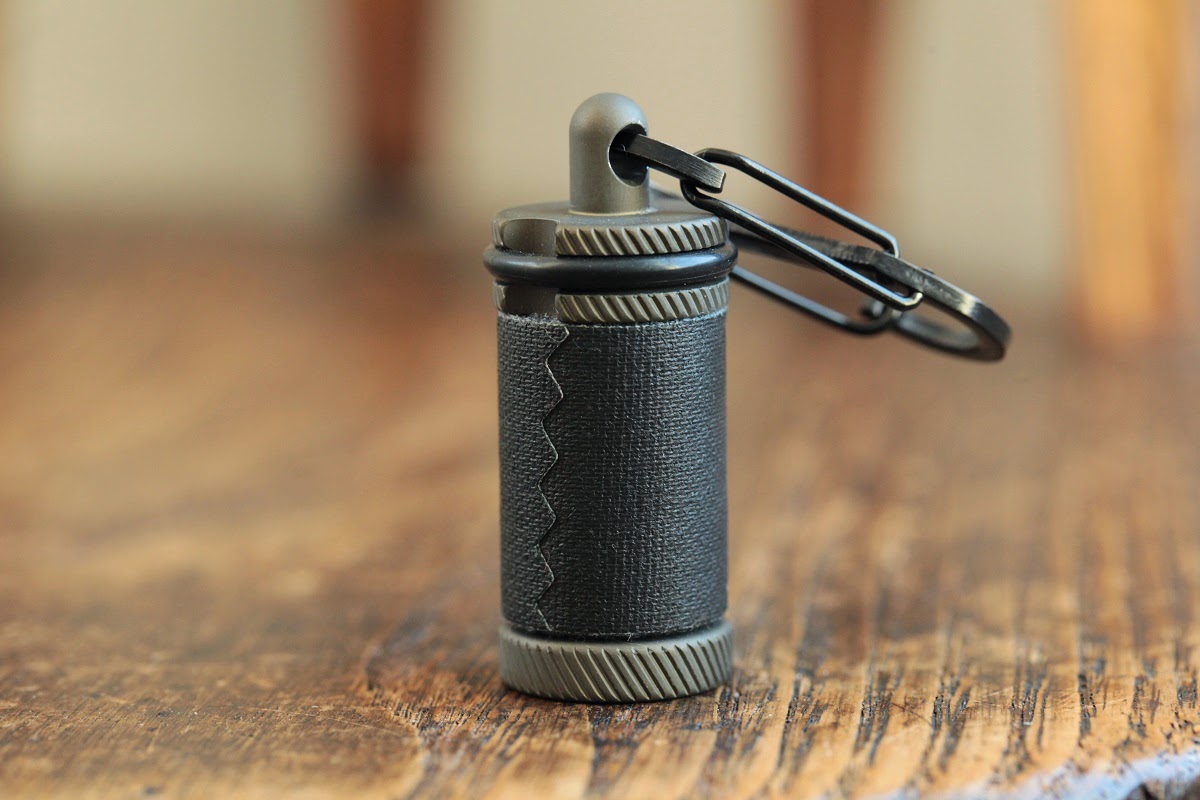 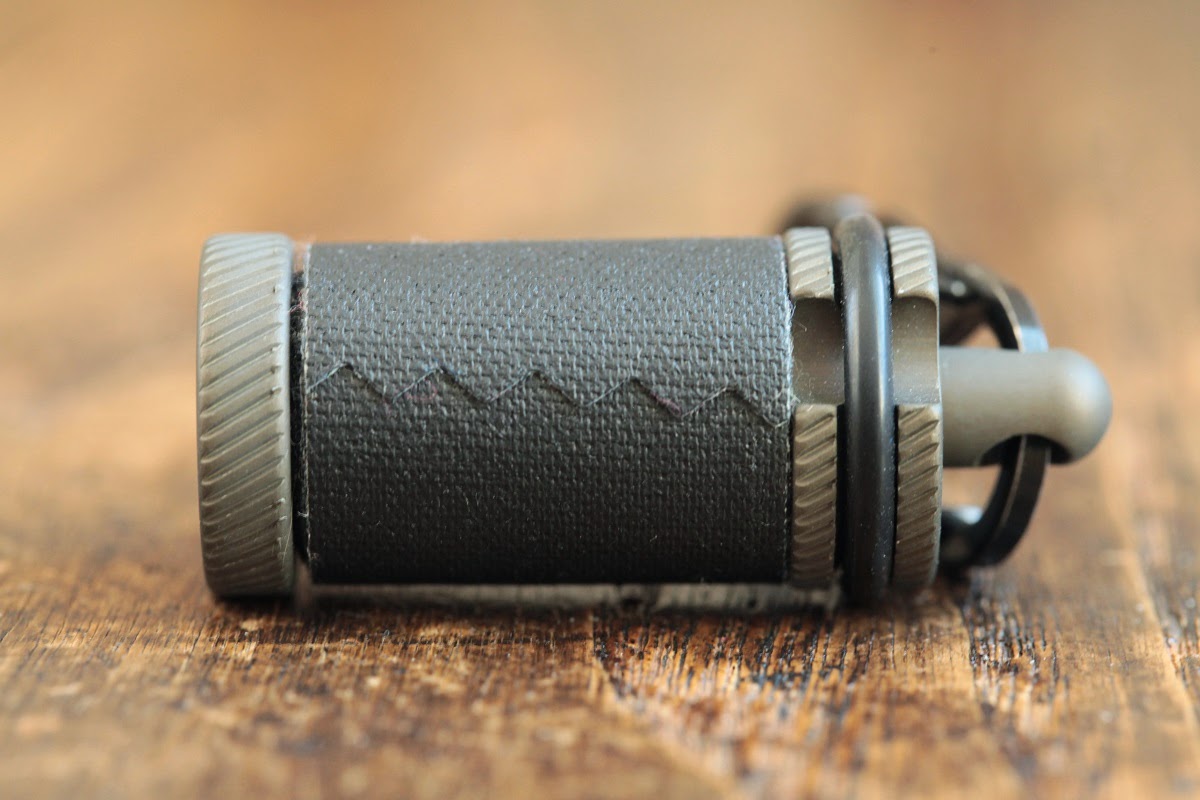 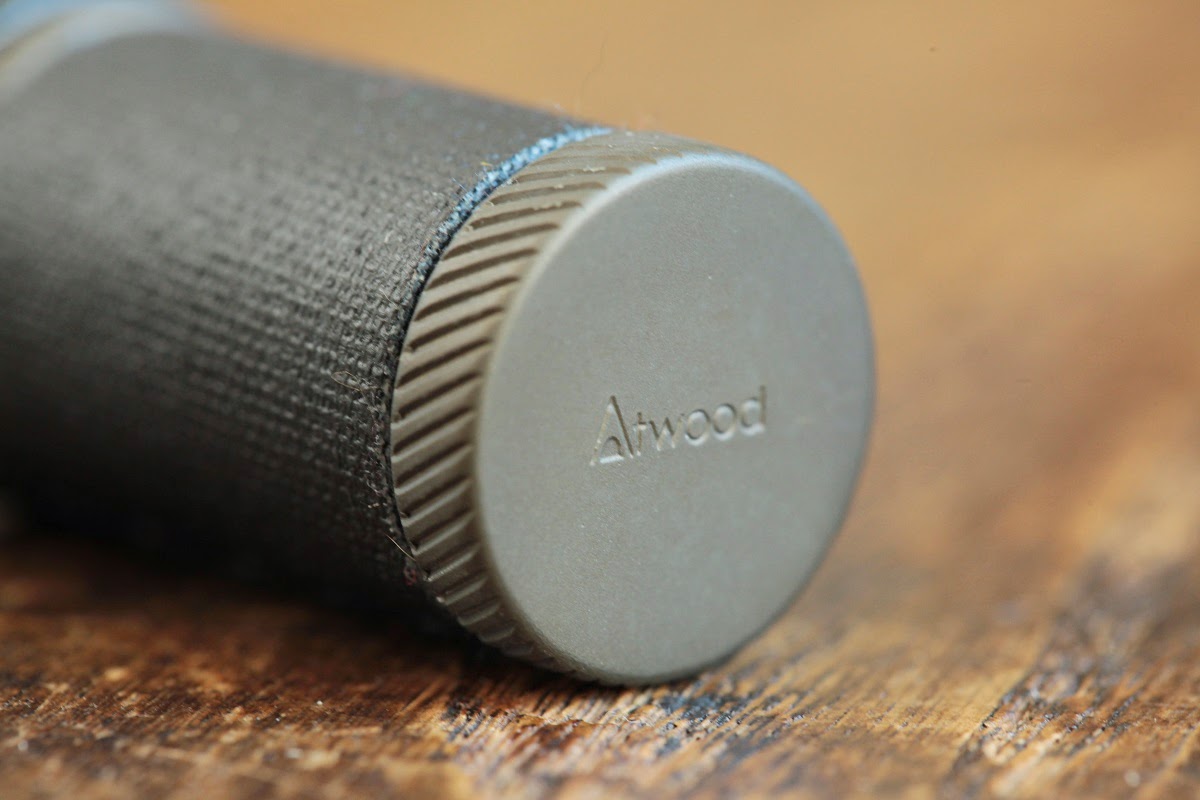 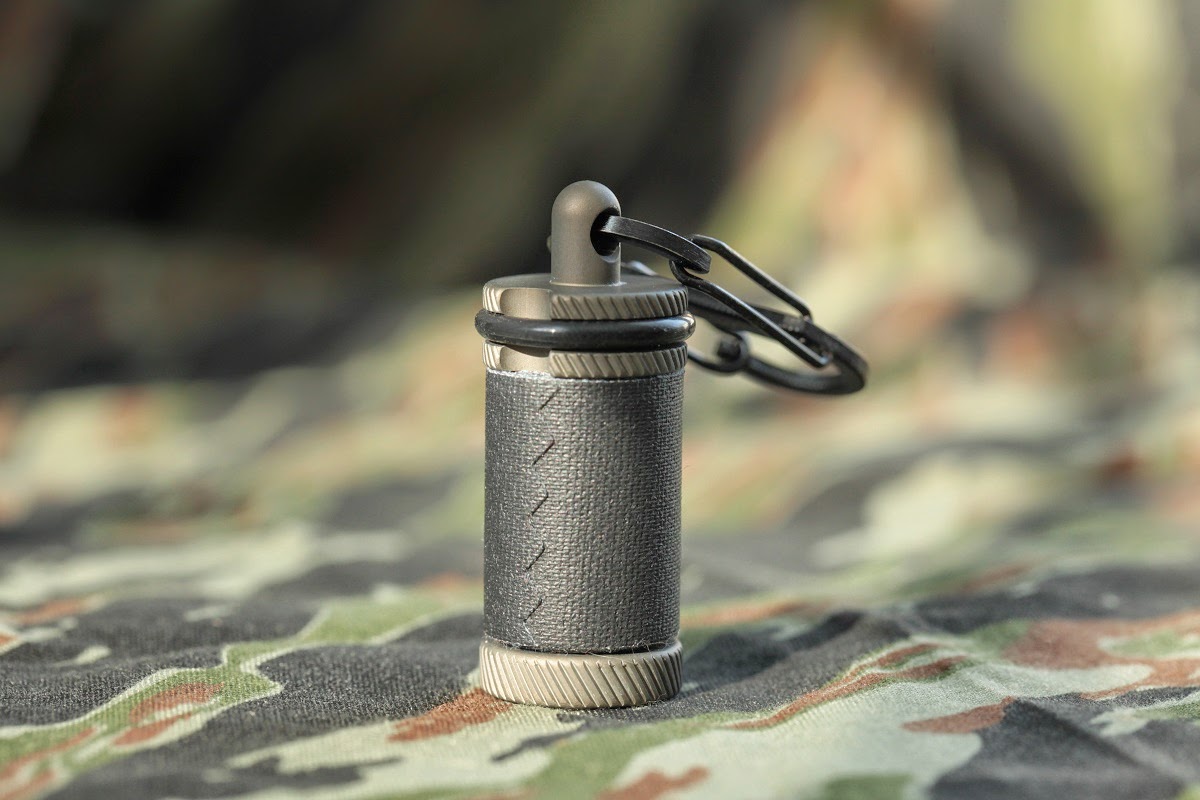