Thanks for participating, here are the results. Will be doing another one of these soon. :)

These were a blast to do! The Splash Anodizing is a rather tedious process but the results are really cool. Well worth the extra effort I think. Each piece is totally unique and I tried to make the patterns as crazy as possible. Good stuff. Because it is time consuming there is a very limited number available so I'd like to keep it to one per customer.

Will be putting the batch on the site tomorrow along with some plain Bermuda Triangles with stonewash finish for the less adventurous. :D 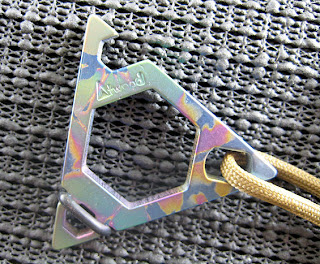 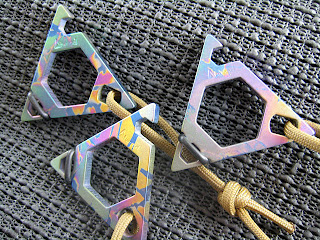 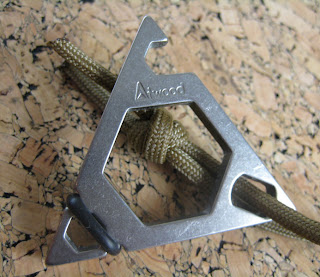 Something on the Side

Every once in a while a little project not related to my stuff comes up that is worth doing. Recently such an opportunity presented itself. Those not familiar with the amazing flashlights of Don McLeish should certainly check out candlepowerforums.com and see for yourself what the King of Custom Flashlights is all about.

This is a sneak preview of one of Don's upcoming LunaSols: 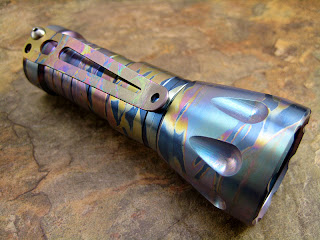 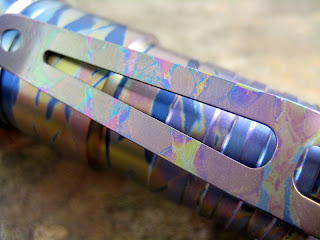 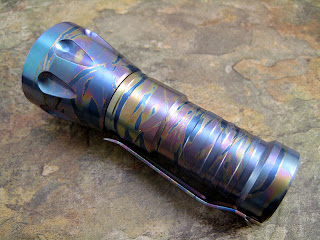 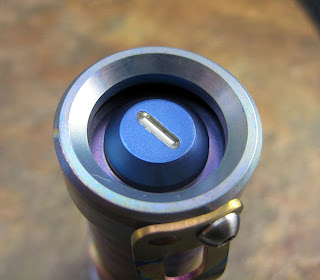 This was a one off project, not doing any others. These flashlights will be costing somewhere in the neighborhood of $500 each to begin with, maybe even more. You'd have to contact Don to get one and again, this was a one off piece and I'm not planning to do any others. It was cool though and so I just wanted to do one and see how it came out. The future owner of the light likes it a lot! :D
Posted by Peter Atwood at 4:37 PM 18 comments:

Here's what the SharkBite tool will look like. A nifty little item with multiple uses. Kind of like the Bike Tool but scaled down to just 3 inches long so it's more pocketable and geared more towards general EDC functions. I also think of it as sort of an enhanced Generation Two Keyton. These are close to 3/16" thick and are made of S30v so they are rather beefy.

This is one that I finished up this afternoon for the picture but it will be going into a heat treat later this week with the rest of the batch: 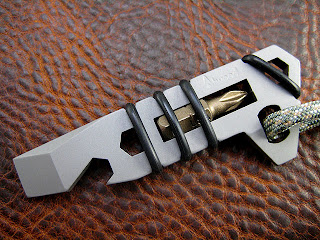 Speaking of Bike Tools, I should have the rest of the O rings and 5mm bits tomorrow and can then start to do the final finish work and assembly.
Posted by Peter Atwood at 4:50 PM 36 comments:

Here's what on the menu this week:

I have some Bike Tools that I will start the finish work on tomorrow but I am lacking bits for most of them so it will be Monday night at the earliest before the whole batch will be ready. I have to put in the order for bits tomorrow and they will be delivered in the afternoon on Monday.

I just cut more Bermuda Triangles today and so they will be delayed until Tuesday or Wednesday at the earliest. I have a rather large batch of these coming.

I have a couple dozen Crawdaddies going into heat treat tomorrow. Also a few dozen G2 Prybabies. These will be finished and ready about the middle of next week.

I have a very small batch of special G2 Mini Gasbabies that will be ready tomorrow afternoon.
Posted by Peter Atwood at 9:19 PM 20 comments:

I'm going to be trying something new this winter. I've decided to make an enormous batch of maybe two or three items. I'm talking huge. Many hundreds, maybe a thousand if I can stand the monotony. I think this might finally allow me to keep just one or two things on the site.

In the past I've tried to make so many things that batches tended to be small. Lately the hard core collectors snap everything up in a short time and many folks never even see the sale. I've enjoyed this immensely for many reasons not the least of which is because with smaller runs I am constantly coming up with new designs and allowing the ones I have to evolve. This keeps things really exciting for me and is immensely gratifying. I think a lot of collectors love it too.

But I think it's time to pick a couple of things from my now huge collection and try to stick with just them for about three or four solid weeks of production time. Not an easy thing for me partly because I have a short attention span and ideas that never seem to stop coming. :)

I also have a constant barrage of emails from established customers asking me what is next and I often feel like I have to keep them happy and make new stuff. I do appreciate that very much but I am feeling the need to take a little time right now and concentrate on the fundamentals.

So I think for a certain period this winter the collectors will have to sit tight because there isn't going to be a lot that will be new and different. Maybe this strategy might also slow down the scalpers who want to buy several of an item and put them on Ebay a couple of weeks later, something that has really irked me.

So, still thinking about what I want to offer...probably will be Bike Tools, some version of my new Nibble or SharkBite, maybe Mini Gasbabies. Of course I have other things that will keep coming in smaller quantities but I'm serious: I want to have enough of a couple of items on the site that people can finally get their fill and leave a few for others.

One thing though, these will NOT be items with sheaths so please don't even ask. The knives are always going to be fairly limited in number, I'm only talking about a couple of tools here.

I'm thinking February might be the time to buckle down and really try to get it done.
Posted by Peter Atwood at 8:36 PM 20 comments:

Well, I'm rested yes, ready maybe, tanned definitely not. LOL, I'm gearing up to do some grinding over the next week and should have some new batches of tools starting in a week or two.

In the works I have: Some more Bike Tools, Bermuda Triangles, G2 Gasbabies, G2 Basic Prybabies, a few Keytons, and a brand new tool called the SharkBite which will be closely followed by a smaller compact version called the Nibble. Pics coming soon... And I have other projects on the drawing board. I'm accumulating materials and finalizing designs right now.

So won't be much available until at least mid week next week, maybe longer.
Posted by Peter Atwood at 4:39 PM 16 comments: