Still working on finishing up a few more of the Skeeters. I have a couple with bright colored cord wrap that I will try to get up on the site tomorrow.

Hoping to start finishing up Mini Keytons, Mini Prybabies and a dozen regular Prybabies tomorrow as well. Should have them up on the site Thursday or Friday.

More flat spanners are planned and material arrived today. Whistles are supposed to be turned any time now.

Prybaby XLs are about 2-3 weeks away.

Whew, that's a lot of projects right there and that's only about half of it! :D
Posted by Peter Atwood at 10:02 PM 2 comments: 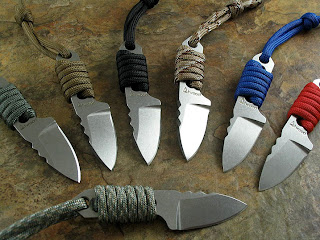 Available on the site while they last. I have a few with stonewash finish and then a batch with my usual antique satin finish.
Posted by Peter Atwood at 7:08 PM 1 comment: 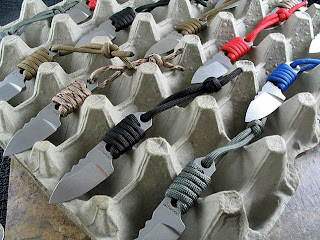 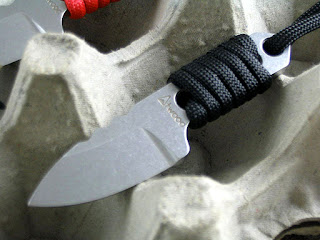 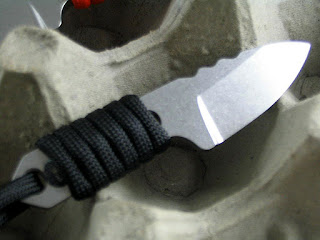 There's just a ton of stuff in process right now. Prybabies, Mini Prybabies, Mini Keytons and a few other models will be back in stock mid week next week. I am heat treating this weekend and fooling around with new stonewash finishes. Tumbling is just way cool especially on these sorts of small tools and tool knives and I'm slowly learning more about it.

Speaking of Stonewash finishes on knives...The new 5/32" thick CPM 154 Skeeters are here. :) I'm working on sheaths right now for them and will get these up on the site sometime this weekend. I've got at least a portion of them with stonewash finish and the rest will be my usual antique satin. A variety of cord colors will be available. These are ground on both sides for a change so the V Grind enthusiasts should be happy. I've been carrying one for the past few days and am just tickled with it. A very handy little piece and at 3 1/8" long it's only a hair longer than the Mini Son of PryThing.

Sorry for the fuzzy pics, I'll pay more attention next time! :D
Posted by Peter Atwood at 8:20 PM No comments: 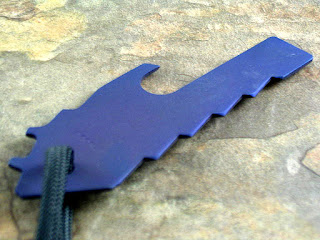 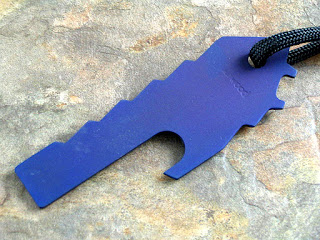 I was never a big Minutemen fan back in the 80's but I do love the play on words from the title of the new documentary of their music "We Jam Econo". :)

I thought a few of these might be kind of fun. They measure only .050" in thickness so they are super light and they fit the spanner slots absolutely like a glove on the Strider folding knives. The screwdriver tip on the butt or on the front can be used as a light weight prytool and scraper but more inportantly can also be used to adjust Emerson and Hinderer pivots. And they open bottles and they are made of TITANIUM! :D

Obviously there isn't the complexity of a regular Prybaby with spanner here so these will be priced accordingly, hence the econo part. I'm thinking they will be about $25. Will have a few done later this weekend. Finishes will be plain bead blast and bead blast with anodizing, solid colors only.
Posted by Peter Atwood at 8:01 PM 2 comments:

The Trouble with Lists

I was maintaining a list for a long time. It seemed like a good idea at first and sometimes it actually worked out. Someone would email me and ask for something that I knew that I would be making down the road. I put their name on the list along with what they wanted. Some period of time later things would be done, I'd go back over it, see their name and send an email. One down, 68 to go.

The trouble was that months would go by and I still hadn't made Widget X for so and so. The list grew and grew. I'd hack away at it as best I could and all the while I'm thinking "Oh shit, I've got to get to Widget X....and Widget Y and Widget Z and all the other Widgets."

After awhile, say 6 months, I'd look over the list and decide that I'm never going to get to this request or that request. Or it's been too long, they will have lost interest by now. So I'd purge off anything older than 6 months.

And still the list grew. It was getting ridiculous, at one time over 80 requests from individuals. Some of these were for 6 or 8 different items and all were custom combinations of stuff. For instance, one guy might want a Wedgie4 with tiger stripes and camo cord wrap and also a brass whistle, a damascus skeeter, a Micro Bug Out Blade without V notch but with a satin finish and OD cord wrap and a tibaby with scalloped edges Area 51 grinds and blue bubbles. And he doesn't want it one at a time, he wants it all at once if possible. Just hold those first three for him while the others are getting finished because he wants it shipped together to save on postage. Yeah right, OK.

Well, I'll tell you, when you have one order like that it's not that big of a deal. You can get to it. But when you have 70 or 80 of these piling up with seemingly no end in sight and more coming in every day two things happen: First you thank God for your incredible good fortune and then you quietly begin to go insane. :D

So that's why I've taken a break from the custom requests and have been ignoring my list for awhile. It's just too much, plain and simple. And that's why I keep telling folks to check the site and this blog for info on what's coming up. I'm still feeling my way towards the best approach to the whole thing and I appreciate everyone bearing with me while I work it out.

So enough of my whining and apologizing! :-) This week, more Sumos and hopefully Skeeters. Also trying to get some more mini Keytons into the heat treat. Prybabies of all sorts in a week or so and a few Bug Out Bars both Micro and full sized. Whistles in 2-3 weeks and I hope there will be a few damascus ones available.
Posted by Peter Atwood at 7:23 AM 3 comments:

I've been cranking out some stuff this weekend. Working on large batches of various tools and small knives. I'm hoping to get a more substantial amount of stock on the site and am working like a maniac. Will have more to report later this week. :)
Posted by Peter Atwood at 1:58 PM 1 comment: 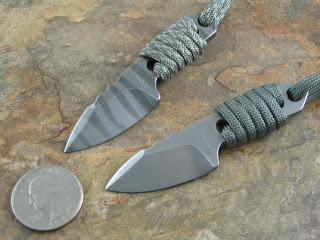 Coming in a couple of weeks!
Posted by Peter Atwood at 4:13 PM 4 comments:

...to eat crow.... :) I just realized while updating my records that I had incorrectly labeled two of my recent offerings. I had the Perforated Prybabies listed as being made of 154CM. That is incorrect. They are made of CPM 154 which is the powder steel version of 154 CM and is a much more premium cutlery version of that steel. Same with the Mini Keytons, not S30v as I had mistakenly labeled them but also CPM 154.

In addition I will be releasing a new version of the Skeeter in a few weeks. It also is in CPM 154. The knife will measure approximately 3 inches in length overall and will have a cord wrapped handle. So sizewise it is similar to the Mini Son of PryThing.
Posted by Peter Atwood at 4:04 PM No comments:

I just spent quite some time trying to log in to my blog today. The people at Google decided that you have to have a Google account to log in. But the dumbasses did not provide a way to get back into your old account to log out so that the new log in would work. And their instructions were useless, resulting in an hour of head scratching and cursing. I guarantee that 99% of the people in the world using the old blogger accounts can no longer get in and now can't figure out what to do. They will have to set up new accounts probably and abandon their old Blog pages. Talk about a disaster, what the heck is the matter with these idiots? :(

Also the Blogger software is some of the worst I have ever seen. My wife wrote the Phlaunt software which is pretty incredible and well designed. Contrasting the ease of building a Phlaunt website to the nightmare of building a Blogger page it's easy to see why I am frustrated. Oh well, I feel better now. :)
Posted by Peter Atwood at 2:45 PM 3 comments:

So What Else is New?

Now too much just yet. Will be slogging though the office crap this weekend as my records are a little out of date. This is the part of being in business that is not fun but it has to be done. More knives are in progress though and maybe by end of next week I'll have a little wave of goodies. Hoping to get to more Keytons, possibly a few Sumos and who knows what else...in the meantime I have a couple of odds and ends and will try to get them up on the site this weekend. :)
Posted by Peter Atwood at 8:44 AM 2 comments: