I thought I'd say a few words about my dear old Uncle Howard. He passed away a few years ago at the age of 90 or so and I wish I had gotten to spend more time with him before he died.

Uncle Howard was my great uncle, my Mom's uncle. He lived in CT and worked at Pratt and Whitney Aircraft for many years in the experimental engine department. Before that he had worked at Chance Vaught in the 1930's, one of the early aviation companies. He had met Amelia Earhart on a few occasions and he knew Igor Sikorsky very well and used to have lunch with him sometimes. In fact he was present at the very first helicopter test flights. Pretty neat stuff.

Anyway, Uncle Howard had a wonderful workshop in a barn next to the little 1830's house in Vernon, CT. I used to love going there as a kid and hanging out in the shop. It was mostly a woodworking shop as I remember it with workbenches covered in shavings and sawdust. Uncle Howard would give me a hand drill and some wood and set me to drilling holes just for fun. Upstairs in the barn there was a loft full of all sorts of junk, antiques and trunks of all descriptions. He had a little office up there where he could go to get away from Aunt Mary and smoke his cigars. On the end wall of the loft he had hung a dart board and I remember standing there many times throwing darts. I used to really love that and still do!

Downstairs he had an experimental car that he had built. The body was entirely of fiberglass and it had a motorcycle engine to power it. I don't think it ever saw much time on the road but it was pretty cool. I remember how he showed me the little pieces of fiberglass on which he was testing coatings. He told me that the first pieces had failed which is why it was important to test on pieces of scrap before committing to the whole thing. That was good advice and I have never forgotten it.

He retired in the late 1970's I think. He and Aunt Mary sold the house in Vernon and moved to a small town in VT. There he set up a very impressive home machine shop and continued to tinker for years. I wish I had been more interested in these things as a young man because Uncle Howard could have passed on so much knowledge to me. Unfortunately I didn't really get into this stuff until after he had declined and by the time I was fully involved with knifemaking Uncle Howard had passed. It's a shame that he never knew how valuable the time spent with him was to me. He gave me a wonderful gift and I'll always cherish it.
Posted by Peter Atwood at 7:06 AM 3 comments:

Sick of Damascus Yet? 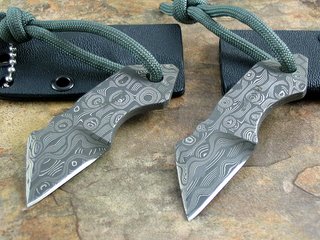 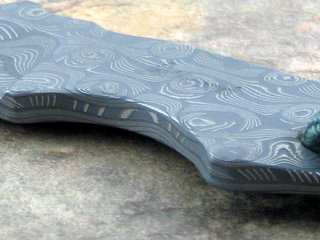 Gotta love that Sunstorm damascus! These were left dark, love the way they came out.
Posted by Peter Atwood at 7:55 PM 5 comments: 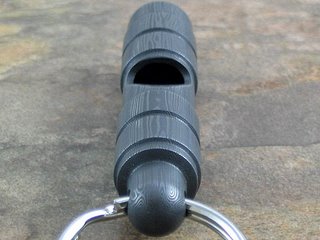 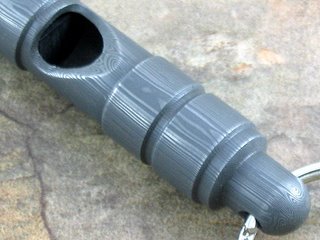 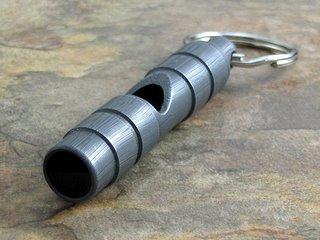 This is a new Damasteel pattern. Don't know the name but it sure does make a purty whistle. :)
Posted by Peter Atwood at 8:11 PM 2 comments:

The Man with No Butt

That's right, I'm working it right off lately. :) LOL, trying to keep up with all the Christmas requests so I've been a little quiet lately. Have a few new items to post this week and I will as soon as I can snap some pics. I'm looking forward to taking a few days off after Christmas but right now it's strictly all work all the time with a small dose of football in between.

Into the category of failed experiments goes the carbon fiber whistle. We tried to do one this weekend and unfortunately it just disintegrated into a mass of hairy fibers. Oh well. It was the thought that counted! Too bad because the outside was looking pretty good but as soon as we went to bore it, pooof!

I'm still not ready to conceed defeat on the titanium whistle. The outside of the one we tried looked fabulous, better than any of the steel ones in fact. But the boring turned out to be a problem and I think we did not have the proper tooling or feed rates so we stalled out halfway into the piece and fried the bit. I think that can be solved fairly easily though and someday it just might become a reality.
Posted by Peter Atwood at 7:12 PM 2 comments: