I went out for Chinese food last night and this was my fortune. Seemed fitting to save it and snap a pic... :)

I certainly have a lot to be thankful for this year and not the least of which is for my many fans. Thanks so much and I hope you all have a terrific Thanksgiving and holiday season!
Posted by Peter Atwood at 9:29 AM 14 comments:

I have Crawdaddies and straight knurl whistles back on the site. More tools will follow over the next few days. To come are a few Bottlebugs and some Area 51 Mini Keytons.
Posted by Peter Atwood at 1:23 PM 8 comments:

Thank You and More Atwood Tools in Progress

First off, I would like to express my deepest gratitude to all the folks who either bid on the recent folder on Ebay or who were following it's progress. I was extremely surprised to see it go so high to be perfectly honest and am quite humbled. I was also amazed that over 120 people were watching the auction. Wow! So thank you all and also thank you for the nice comments about it.

There will be two more folders coming up when I get them finished and they will also go up on Ebay. That will be it for Atwood folders for 2007 I think, the first folders I have made in over two years. No clue yet if I will make more next year or not. If I do make more it will not be many that's for sure. I enjoy making them every now and then but I really do much prefer my little tools.

In the meantime it's back to our regularly scheduled programming. I have a good sized batch of stuff going into heat treat tomorrow and that would include Crawdaddies, BottleBugs and Area 51 Mini Keytons. I hope to start more G2 Prybabies pretty soon and I have tons of whistles to get to as well. Also the last 12 of the Micro Bug Out Blades will be getting sheaths very soon followed by a batch of full sized Bug Out Blades. So, look for stuff on my website probably early next week.
Posted by Peter Atwood at 9:01 PM 13 comments:

Alright, I just listed this UFO on Ebay. It seems like it is the best way to do this since so many want one of these but there will only be a couple available and probably that will be it for the year. Wish I could make dozens of them but they are ridiculously time consuming to make so the numbers are going to be very limited.

Thanks for all your very kind words and the many email inquiries and comments on the blog! I sure do appreciate it. :) 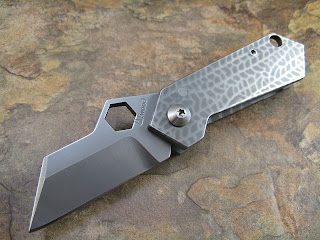 These rare and shocking images were smuggled out of Area 51 yesterday by a determined journalist. Keep in mind that what you are about to see may not be of this earth. Indeed this Unidentified Folding Object may have come from the very depths of space itself and its ultimate impact on the people of this planet can only be imagined. 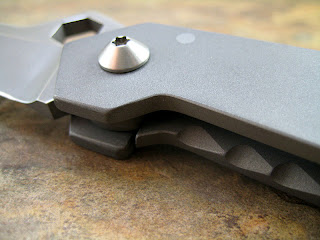 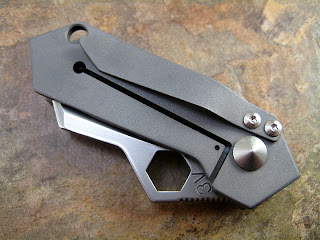 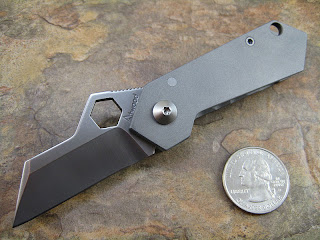 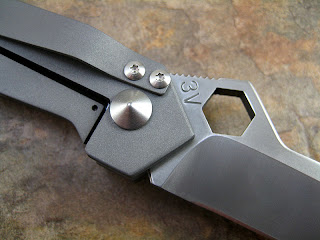 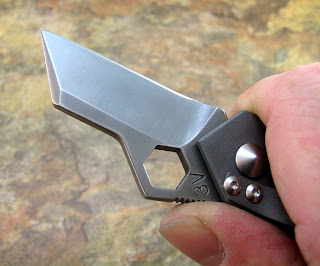 Just posted a few on my site. Please email for availability...peter (at) atwoodknives (dot)com
Posted by Peter Atwood at 2:16 PM 3 comments:

Well, all the townspeople showed up to the crash site to see what there was to see. The sheriff and Pastor Warner got the closest and reported back that there wasn't much there and that everyone needed to go home. They must have been scared witless.

Luckily for us one intrepid soul, Billy Jones from the University's geology department, decided to ignore the official's warnings and managed to snap a quick shot of the artifact in question. He also happened to have a portable geiger counter with him and reported that the thing is hot, VERY hot. It's a little odd considering that usually exposure to RADIATION causes things to grow to enormous sizes. But in this case the result seems to have been just the opposite, actually shrinking the tool to a blade length of just two inches. Maybe the aliens need to try Toolagra or something because you know those female aliens are probably unhappy...

This shot isn't the best but it sorta kinda gives an idea of what it looked like. Maybe if it shows back up Billy can try again and this time his camera will be ready... 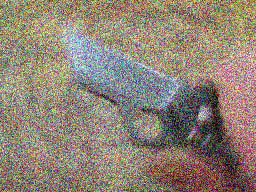 Fact or Fiction? You decide.

There has come late word today of a UFO sighting in western Massachusetts. Eyewitnesses on the ground reported seeing a small well made object riding in the righthand pants pocket of knifemaker Peter Atwood. The Unidentified Folding Object was described as tiny and of the commonly seen framelock variety.

“I’ve never seen anything like it!” one man said excitedly. “It was weird, all angles and everything and it had a scary sharp edge. If it weren’t for the fact that I wanted it so bad I woulda took off running.“

Clearly he was the village idiot but he’s the only eyewitness so far. His reliability could not be confirmed as he was noted to have been wearing a tight white jumpsuit with the arms tied across his chest and his mouth was covered with frothy white spittle. Please stay tuned for more details which will be made available if and when we have them.
Posted by Peter Atwood at 3:14 PM 24 comments: