Hopefully y'all haven't gone away and forgotten about me...I'm working hard to get things going again! :) This is kind of like last August if you some of you remember that period. I had a lot of stuff in process but nothing finished for several weeks. But then I was able to keep sales going with some regularity for awhile.

The Mini BrewDrivers will be done later this week. No doubt I will have several sales with various finishes. See pic below.

I'm working on the Candy Bar tool which I think I may rename the Wroach. It's a 3.5" Mini Bug Out Bar kind of thing with several wrench openings, o2 tank wrench as the lanyard hole and o ring grips. Approximately 3-4 weeks away on those. They are titanium.

And I have another design finalized yesterday called the Flea and that one is a pendant type tool but it has O2 tank wrench, 1/4 hex, bottle opener and pry tip. Kind of a radically redesigned Chigger, similarly sized, and those will be in thick steel to start. There are three variations of that design. 4-5 weeks away on those.

SAE WingNuts are also in process, 2 weeks away on those. 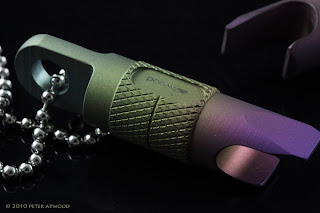 nice! Looking forward to seeing some images of the new tools!

Wow, looks like you have got a lot of cool things in the works. I better start pinching my pennies now :)

Thanks for the update. The Wroach sounds like a must have! Updated Termite?

As the Arctic Flea, I feel that it is essential for me to add a Flea to my growing collection of tools.

I'm itching for the wroach and flea's :)

Sweet! Cant wait to see them!

Woot, I was holding off on a brewdriver in hope of these mini ones, they look _great_! Fingers crossed I can nab one... :)

Sounds great,thanks for the update!!! Have to start saving up!!! Gary :>)

Wow man, so much to come! This is exciting! Love the mini brewdriver, btw.

The updated ti superbug hasn't disappeared has it?

The Wroach sounds like it's right up my alley!!! :D

ETA on a new Fixer offering?

Peter, I know your terribly busy but any image of these new tools(a drawing on a cocktail napkin, etc.) would be appreciated!!!!Thanks! Gary :>}

Cocktail napkins with drawings on them are sold on another website.

will anyone of the forthcoming ti tools have the satin-finish? the photo from the blue brewdriver (try saying that 10 x fast) is exquisite.

thanks for the updates . . . i think i prefer the surprise postings . . . but maybe means more of a time suck for you.

great stuff, all the way around.

Peter,
I was just up in your neck of the woods (on work, unluckily), up in Colrain, MA. Beautiful country, I tell ya. I'm excited to see some new tools coming out, especially the Wroach.

Peter, I could never forget about you or your gadgets!!! I LOVE your work!!!