Hope your Thanksgiving was a good one! I ate too much as usual and then watched some GREAT football games so it was a pleasant and relaxing day for me.

Ok, so it's been a long time since I've done a Sign Up Sale. I have several regular projects underway but due to unforeseen delays they are taking forever to get finished...so in the meantime I thought perhaps a little SUSale action would be just the thing to break the monotony.

For those folks who are more recent fans and have not encountered the SUSale system before please familiarize yourself with the rules and also, remember that it's ONE ENTRY PER CUSTOMER please. We carefully go over the list and any duplicate entries will be deleted at the end before the random numbers are selected so don't be "gaming" the system here!

Today I have something really special and very old school. These were leftover from a run of whistles that were made about 6 or 7 years ago, back from the very first run of whistles. At that time I wanted to use mostly just stainless or brass to make whistles. However, the guys at Amherst Machine stuck a bar of aluminum in the machine and turned a dozen plain aluminum bodies as a test to prove out the design before running the rest of them. I sold a couple of these plain unanodized aluminum oddballs over the years but hung on to the rest. Earlier this year when I sent out the 5 rib Longslides for anodizing I decided to throw in these whistles as well and finally get them finished up.

So, there are a total of 9 Olive Drab Green Aluminum Rifle Knurled Whistles available. Eight of these are on Dungeon Finish matte bead chain. There is one more that has the lanyard hole drilled at a funny angle and that one is on a keyring, so it's a true one of a kind setup piece.

The whistles will run $50 each plus shipping and the sign up period will end tonight, Friday 23rd at 8PM Eastern time so get your entry in before then. The winning numbers will be announced shortly after 8PM and at that time I will send emails and purchase links to the winners.

Sign up period is over, thanks so much to  everyone who entered! List will be coming shortly... 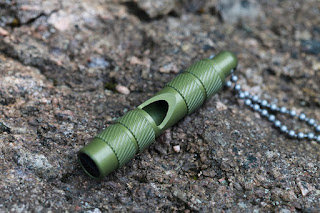 Good luck everyone. My first SUS.

Good luck to all those who enter!

This is a real walk down memory lane!

Well here is to hoping! Good luck to all that entered!

Thanks for the chance Peter!!!

very cool Peter! Nice to not miss the sale in usual fashion...

Cool, I like the photo too Peter,
Thank you very much for a chance :)

WOW, what a black Friday deal ! My firft SUS. Good luck to everyone !

I was able to fondle these when they returned from plating, and the are quite nice:)

Thanks for the lottery sale, a nice change of pace from the normal mad dash.

My first SUS, good luck everyone. Thanks for the opportunity Peter.

This is awesome. Good luck to everyone. My first SUS. And a shot at my favorite color and tool I don't have. I like it.

Very cool look, and just the right color for my bug out bag set!
Thanks for doing the SUS Peter!

Thanks for giving us all a chance Peter.
Good luck to all!

Hey Peter, what's the record for a SUS (most signups)? These look awesome, and I have definitely been hoping for a whistle. Good luck all!

First sign up sale for me as we'll. Very exciting. These look awesome!

Aw I missed it!